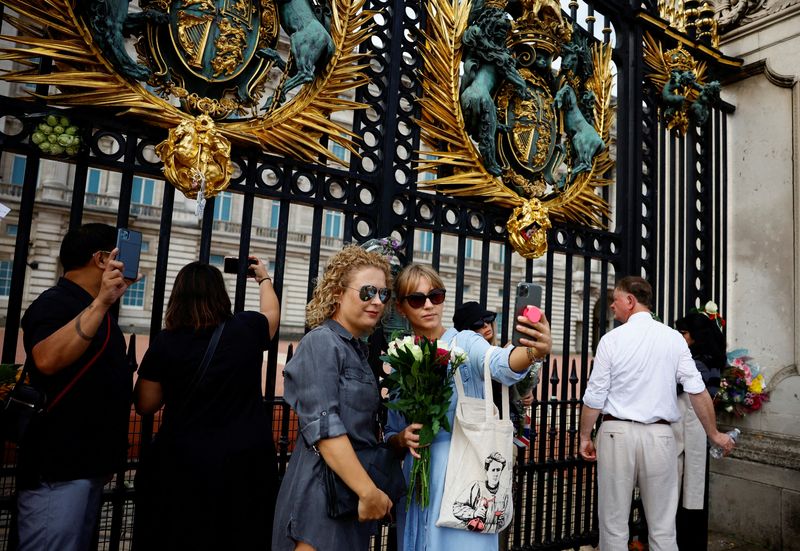 By Humza Jilani and Andrew MacAskill

LONDON/EDINBURGH (Reuters) – Some shed tears or wore military uniforms and medals, others took selfies and video-called distant friends and relatives. All felt they were playing a small part in history.

Four days after the death of Queen Elizabeth, London and Edinburgh were the focus of pomp and ceremony mourning the passing of Britain’s monarch of 70 years and marking the accession of her son, King Charles, to the throne.

In Edinburgh, where the queen’s body was driven on Sunday after she died at her Scottish holiday home, Balmoral, last week, people of all ages, ethnicities and social classes turned out to pay their respects. The mood was sombre and, despite the huge crowd, quiet.

Many had arrived early on Monday to take their place along the Scottish capital’s Royal Mile ahead of a solemn procession that took the queen’s coffin to St Giles’ Cathedral, where it will lie at rest before being taken to London on Tuesday.

“I just feel so privileged that we can watch this moment,” said Carol Williams, 52, a primary teacher. “We are so lucky that we have this opportunity to pay our respects like this.”

In central London, thousands more gathered in Green Park, close to the monarch’s Buckingham Palace residence, where a spreading carpet of floral tributes has been laid.

Many people, particularly among the older generations, shed tears. Some wore black mourning clothes or had put on old military uniforms.

“I feel very emotional, I’m so surprised,” said Helen Young, 78, from the village of Llangynidr, in south Wales. “I have so many friends back in Wales who are so royal-orientated, and they live back in Wales and I am here representing them.”

Chris Maycroft, 67, from Dorset, in southern England, was wearing a military beret and a blazer with his service badges.

“I only just arrived, and this is pretty overwhelming to be honest,” he said.

“I’m an ex-serviceman, 50 years ago I made an oath of allegiance to her majesty, and I’ve come down to pay my respect. We’ve suddenly got a common purpose, don’t we? To pay our respects. She was an amazing woman.”

Many younger people, and overseas visitors, appeared more curious than upset, turning out to experience the occasion – and record it on their smart phones.

“This is history,” said Zoey Chong from China. “I want to take the photo and the recording to my parents or to my future baby to tell them I came here. This is history and now I’m a part of it.”