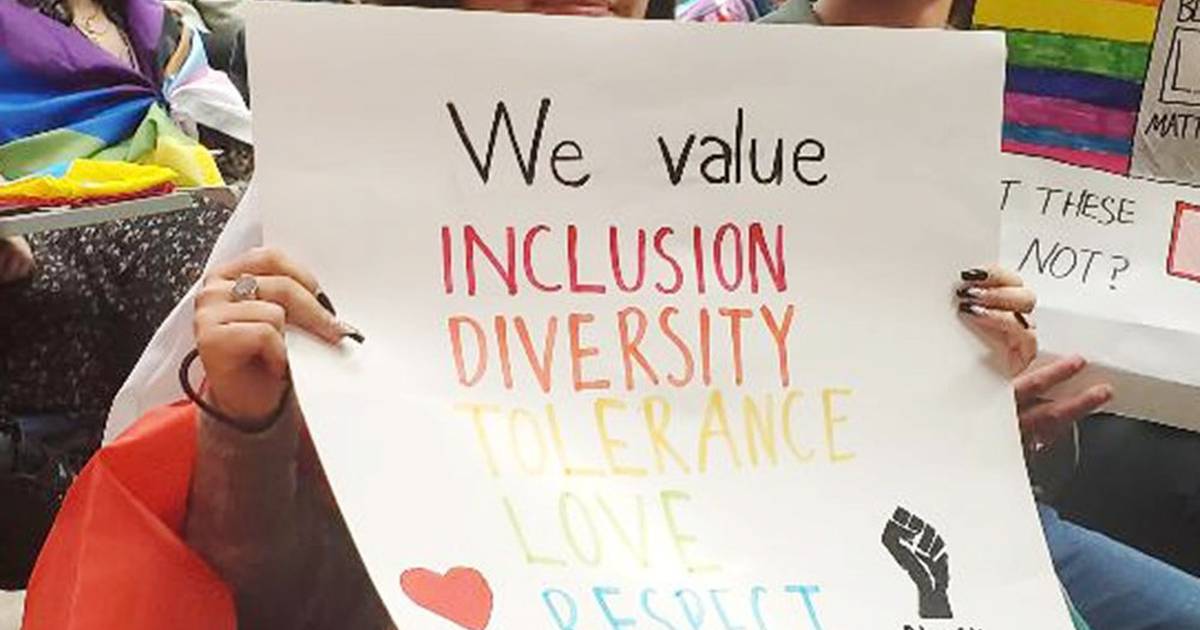 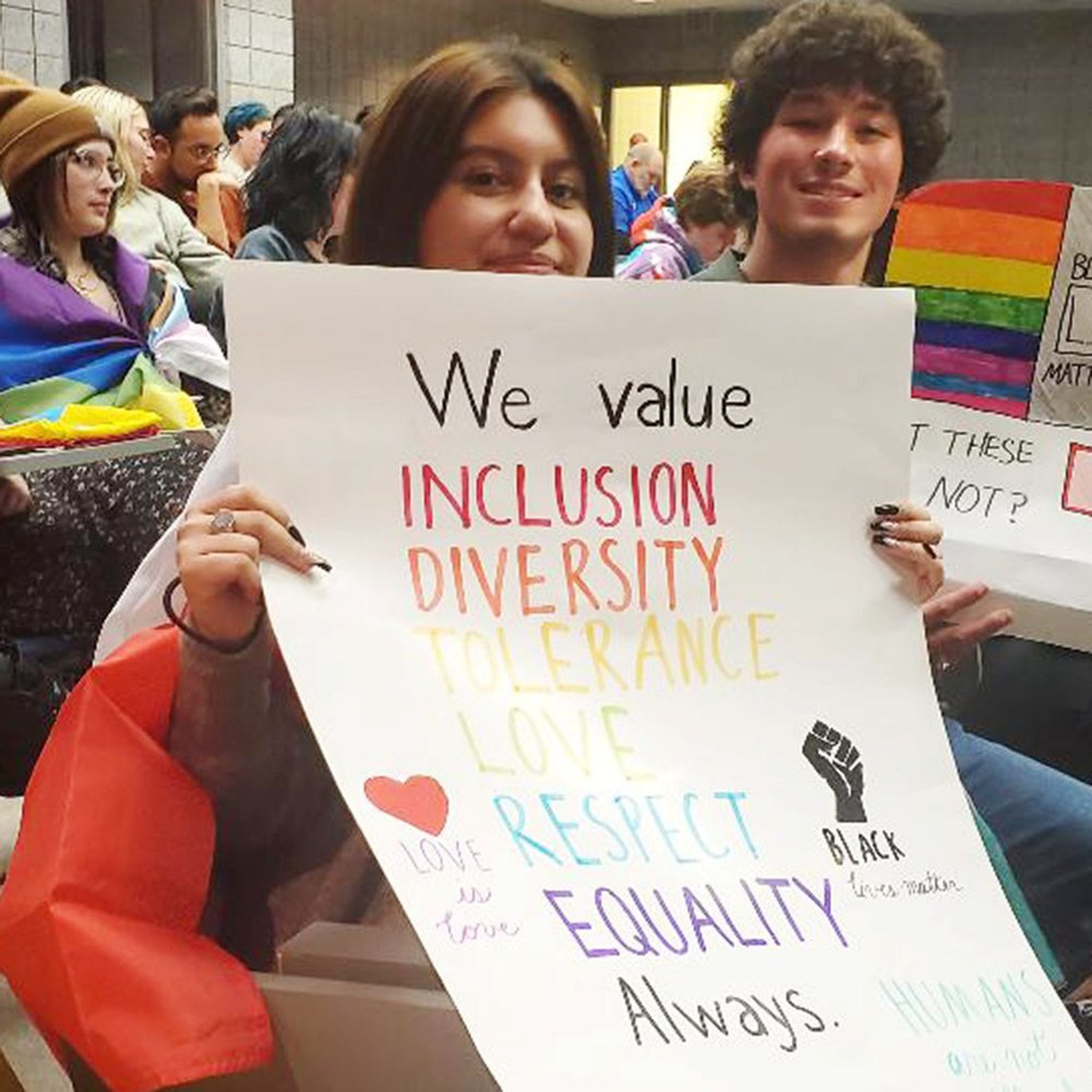 “In this classroom we believe science is real. Black lives matter. Love is love. Feminism is for everyone. Humans are not illegal. Kindness is everything.”

A poster stating those words no is no longer displayed in a classroom at Lake Central High School, after an individual complained at the previous school board meeting that it was objectionable.

School officials took it down because, as Superintendent Dr. Larry Veracco asserted at Monday’s Lake Central School Board meeting, it constitutes “political” speech and therefore is not appropriate in a classroom setting.

The vocal and highly emotional standing-room-only crowd of students, parents and teachers who packed the school board meeting had quite a different take on the matter.

For more than two hours they stepped to the microphone to address the school board and administrators, expressing why they felt it was wrong and damaging to students to remove the poster. In airing their views, they petitioned the Lake Central School Corporation to do more to advance an open and inclusive environment.

The significance and urgency of the issue was in full display. Some students shook nervously, shed tears and their voices cracked with emotion as they told their personal stories of intolerance and mockery they’ve experienced as Lake Central students. Others came draped in rainbow flags to show their solidarity with their LGBTQ+ classmates, held up handmade signs or wore T-shirts expressing “who they were.”

Veracco prefaced the item on the board agenda entitled “The Complexities of Political and Religious ‘Speech’” by passing out a legal opinion from Indiana Attorney General Todd Rokita, a Munster native. In the opinion, dated November 22, 2021, Rokita identifies “Black Lives Matter,” exclusively, as a “political organization.” Citing a litany of case law, Rokita categorized “non-neutral” classroom signage as non-verbal political speech.

In addressing the audience, Veracco said a display, such as an LGBTQ+ Pride flag, would not be considered political speech in that state of Illinois or Oregon, but in Indiana, according to the Rokita’s opinion and his supporting case law, it is classified as political.

Veracco said it has been determined that the poster in question fits into Rokita’s classification of non-verbal speech, and therefore is potentially disruptive to the educational environment.

Correspondingly, the Lake Central School Board distributed a policy directive to the audience, communicating the administration’s desire to adhere to the Rokita’s opinion. As the policy states, “Lake Central will only permit classroom displays and decorations that are neutral politically or religiously.”

As Veracco urged teachers and staff to be more vigilant against bullying and intolerance, he said it was an issue that the school district could not legally win, and thus a “business situation” to remove the poster and any displays that express political or religious views.

The crowd wasn’t having it. They took exception to the notion that the poster was either political, religious or disruptive to learning. Quite the contrary, they continued to argue.

One after another, students, parents and teachers labeled the ideas on the poster as “humanitarian” statements — explaining that the ethos of “black lives matter” is mutually exclusive from any so-called organization appropriating those very words as its name.

They argued that such expressions are essential to an environment in which students should understand that they are in a safe, welcoming and open environment while free to express their individuality, ethnicity and life choices. Some speakers cited statistics about the LGBTQ+ teen suicide rate, and that the most open and accepting school districts had better test scores and higher rates of achievement among students.

Kate Perschon, who has two sons attending Lake Central, explained to the school board that taking away the sign sends a message that not everyone is welcome at school.

“This is not a political or religious issue,” she said. “It is not a personal beliefs issue. This is a human rights issue, human rights for all people in a public school in a democracy.”

Vanessa Welty, a Crown Point resident whose three sons attend Lake Central schools, said she was disappointed in the board’s move, which she characterized as unsupportive to a group of people that have been historically marginalized.

“I find it laughable that anyone would be offended by ROY G. BIV (the rainbow Pride flag), but unfortunately here we are,” Welty said.

Some Lake Central students complained that certain teachers and staff have been unresponsive to their cries for help, having experienced sexual harassment and even physical harm for how they looked or whom they openly chose to love. To them, and others who expressed support for their classmates as a “straight ally,” the classroom poster has become a symbol, a de facto lifeline to those protections afforded them in the school district’s student handbook and policies.

As one student put it, “The sign shows the school cares.”

Others took it a step further, saying their civil rights were being violated.

The overall sentiment in the room was one that Lake Central should not bow to the objections of a small minority or one individual, and that if it means a legal fight, they welcome it.

Jim Masters is a freelance reporter for the Post-Tribune.