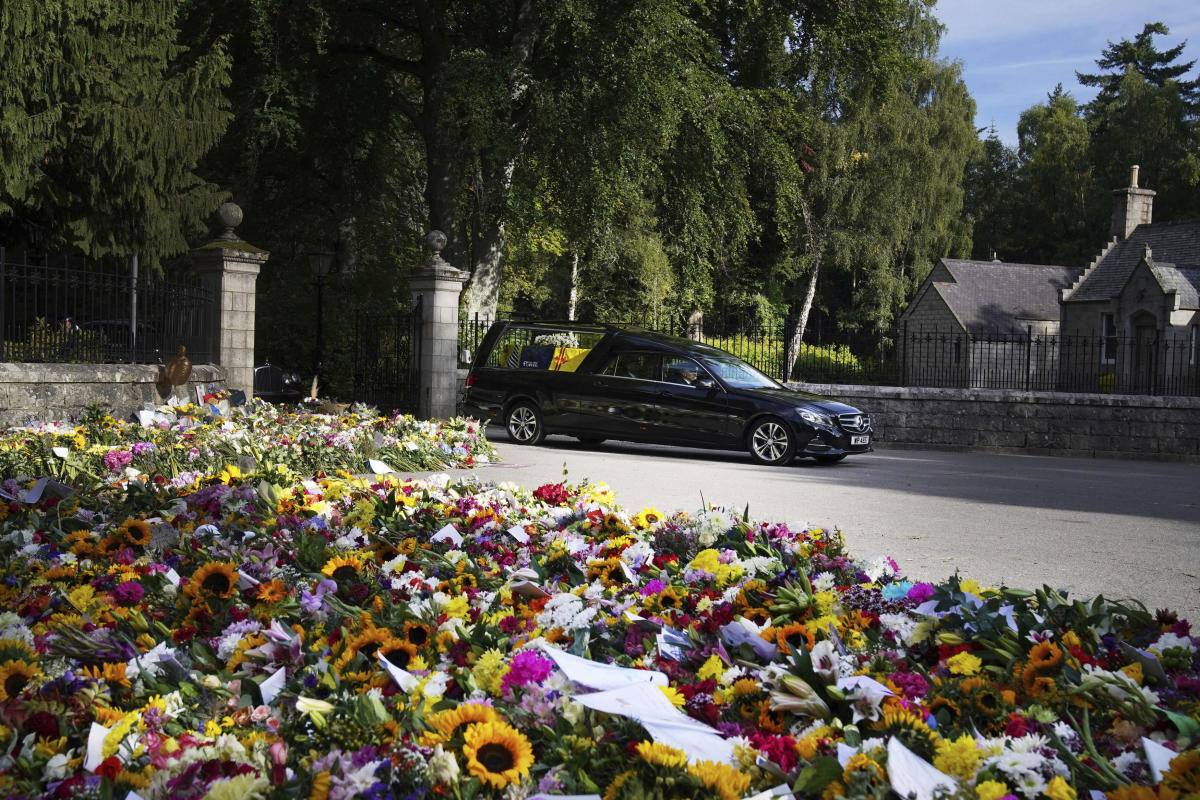 LONDON (AP) — Queen Elizabeth II’s flag-draped coffin left her beloved Scottish estate Balmoral Castle on Sunday as the monarch who died after 70 years on the throne begins her last journey back to London for a state funeral.

The hearse drove past piles of flowers and other tributes as it led a seven-car cortege from Balmoral, the summer retreat where the queen died Thursday, for a six-hour journey through Scottish towns to Holyroodhouse palace in Edinburgh. The late queen’s coffin was draped in the Royal Standard for Scotland and topped with a wreath made up of flowers from the estate, including sweet peas, one of the queen’s favorites.

“A sad and poignant moment as Her Majesty, The Queen leaves her beloved Balmoral for the final time,” the First Minister of Scotland, Nicola Sturgeon tweeted. “Today, as she makes her journey to Edinburgh, Scotland will pay tribute to an extraordinary woman.”

Crowds lined parts of the route as the nation mourns its longest-reigning monarch, the only one most Britons have ever known. In the Scottish village of Ballater, where residents regard the royal family as neighbors, hundreds of people watched in silence and some threw flowers in front of the hearse as it passed.

Before reaching the Scottish capital, the cortege is traveling down what is effectively a royal memory lane — passing through locations laden with House of Windsor history including Dyce, where in 1975 the queen formally opened the U.K.’s first North Sea oil pipeline, and Fife near St. Andrews University, where her grandson William, now the Prince of Wales, studied and met his future wife, Catherine.

“I am deeply aware of this great inheritance and of the duties and heavy responsibilities of sovereignty, which have now passed to me,” Charles said as he took on the duties of monarch.

He will be proclaimed king in other nations of the United Kingdom — Scotland, Wales and Northern Ireland — and in towns across the country Sunday. Earlier, proclamations were held in other parts of the Commonwealth — the group of former British Empire colonies — including Australia and New Zealand.

In the New Zealand capital, Wellington, the British monarch’s representative, Governor-General Dame Cindy Kiro, said: “On behalf of all New Zealanders, I extend to King Charles our loyalty and support and wishes for a long and happy reign.”

Even as he mourned his late mother, Charles was getting down to work. He was meeting at Buckingham Palace with the secretary-general of the Commonwealth, a group of nations that grapples with affection for the queen and lingering bitterness over their own colonial legacies. That ranges from slavery to corporal punishment in African schools to looted artifacts held in British institutions.

Amid the grief enveloping the House of Windsor, there were hints of a possible family reconciliation. Prince William and his brother Harry, together with their respective wives, Catherine, Princess of Wales, and Meghan, Duchess of Sussex, delighted mourners near Windsor Castle with a surprise joint appearance Saturday.

The queen’s coffin will take a circuitous journey back to the capital. On Monday, it will be taken from Holyroodhouse to nearby St. Giles’ Cathedral, where it will remain until Tuesday, when it will be flown to London. The coffin will be moved from Buckingham Palace on Wednesday to the Houses of Parliament to lie in state until the funeral at Westminster Abbey on Sept. 19.

In Ballater, near Balmoral, the Rev. David Barr said locals consider the royals as “neighbors” and try to treat them as locals when they spend summers in the Scottish Highlands.

“When she comes up here, and she goes through those gates, I believe the royal part of her stays mostly outside,” he said. “And as she goes in, she was able to be a wife, a loving wife, a loving mum, a loving gran and then later on a loving great-gran — and aunty — and be normal.”