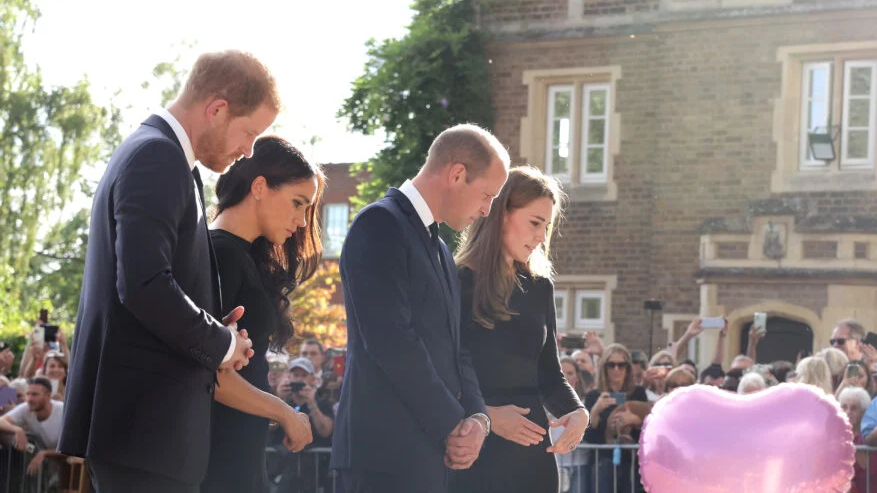 If reports are to be believed, all is not well between Prince William and Prince Harry. Even now.

Following the death of their grandmother, the brothers and their respective wives made a public appearance.

It was, by all accounts, awkward for everyone involved.

The family came together to mourn their matriarch. But it was not a magic fix-all for past rifts.

Given all of the negative “hype” about Harry, Meghan, William, and Kate, their show of solidarity surprised many.

The public saw the four of them take a somber walk outside of Windsor Castle following Queen Elizabeth II’s death.

There, they admired tributes and offerings to the late monarch.

An inside source spoke to People this week about what the two dukes and two duchesses were feeling at the time.

“It was awkward,” the insider reported.

“Both couples found it hard,” the source detailed.

“They were in a stoic spirit,” the insider characterized.

The source added that they had embraced a focus “of just getting through it.”

In the case of all four of them, the insider explained, they wanted to do this “for the Queen.”

The four of them stepped out on Saturday, September 10.

This was two days after the late queen passed away in Balmoral Castle.

It was not much of a spectacle, nor was it meant to be. It was a display of solidarity and mourning.

The official word from Kensington Palace at the time was that William extended the invitation.

However, another report alleged that security had not been expecting both couples.

But an inside source said that the outing “was an important show of unity at an incredibly difficult time for the family.”

This same insider went on: “It’s such an extraordinary historical moment.”

“And also,” the source noted, “a deeply personal one for the family.”

The insider said that it was such “that you’d hope and think that all members of the family would unite and support [King Charles III] especially.”

“And perhaps,” the insider suggested, “some of those wounds can be healed in the process.”

Charles is considerably less popular than his late mother. This has been the case for decades.

But many families come together to grieve. Even for royals, not everything is about image. Most things are, however.

As always, we remain leery of reports that characterize how famous people privately feel. Even from reputable publications.

Still, you can tell that this is from a mainstream American magazine and not from a British tabloid.

It’s refreshing to see a report focus upon the brothers without portraying Duchess Meghan as an antagonist.