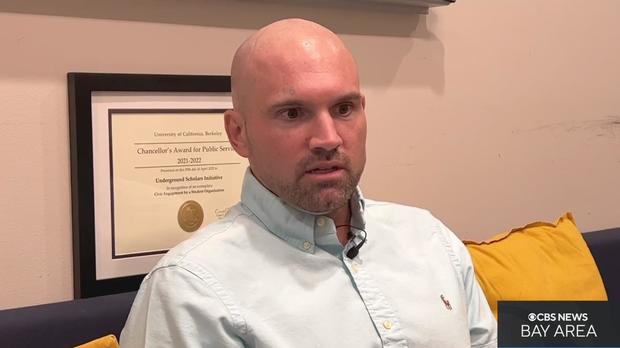 BERKELEY – A bill on Gov. Gavin Newsom’s desk may determine the fate of hundreds of California inmates who are sitting in solitary confinement — a common and controversial practice that states across the country are moving to restrict.

For a consecutive nine years and four months, Kevin R. McCarthy spent 23 hours a day in a 6′ by 10′ room.

“From here to here. And then from that pillar, it was pretty small,” McCarthy described to KPIX 5.

McCarthy was held in solitary confinement after being placed on a list of suspected gang affiliation. A punishment, he says, did not match the crime.

His experience is a powerful supporting argument for a bill sitting on Newsom’s desk that would limit the use of solitary confinement in California, a bill he’s been advocating for since his release.

“I remember seeing the green and the trees and it was almost like this psychedelic feeling, you know, because I had not seen like, you know, the color green, so many years,” McCarthy recalled.

During the long days at Pelican Bay penitentiary up north McCarthy stumbled upon an opportunity, a chance to turn his life around through Cal’s underground scholars’ program

He thought, “Oh, my God, you know this is perfect you know? Yeah it really motivated me and uplifted me,” said McCarthy.

Like a scene out of “Shawshank Redemption,” McCarthy studied. And studied, until he accomplished what he set out to do: become a student at UC Berkeley. The first presently incarcerated person to do so.

“I remember thinking about this gate right here and getting out and taking a picture in front of the gate and like this gate. It symbolizes my freedom, it symbolizes making it,” McCarthy said.

Today, he’s writing his thesis and is on track to graduate next spring — an accomplishment he describes as bittersweet.

“There so many men and women in there who never got a second chance you know, are still stuck there and more capable of such great things, but the way the laws are written they don’t, they don’t have that chance,” he said. “I just feel so guilty for them.”

“There were some there were some dark times and sometimes,” said McCarthy. “But when I got here and took that picture in front of this gate, I just felt like okay, I won. I made it. Still a surreal feeling.”

McCarthy is also applying for law school and hopes to help other incarcerated people find hope and justice.

The legislation – AB 2632 – would prohibit the use of solitary confinement among those who are pregnant, those under 26 or over 59, and people with disabilities or mental health disorders.

It would also limit the practice not only to 15 consecutive days – but no more than 45 days in a 180-day period.

The legislation follows a wave of other states moving to restrict the practice and has seen wide support among disability and civil rights groups. Opponents include corrections officials and State Sen. Brian Dahle, who is running against Newsom in the governor’s race, who has said it would make jails less safe.

Newsom has until September 30 to sign or veto the legislation.