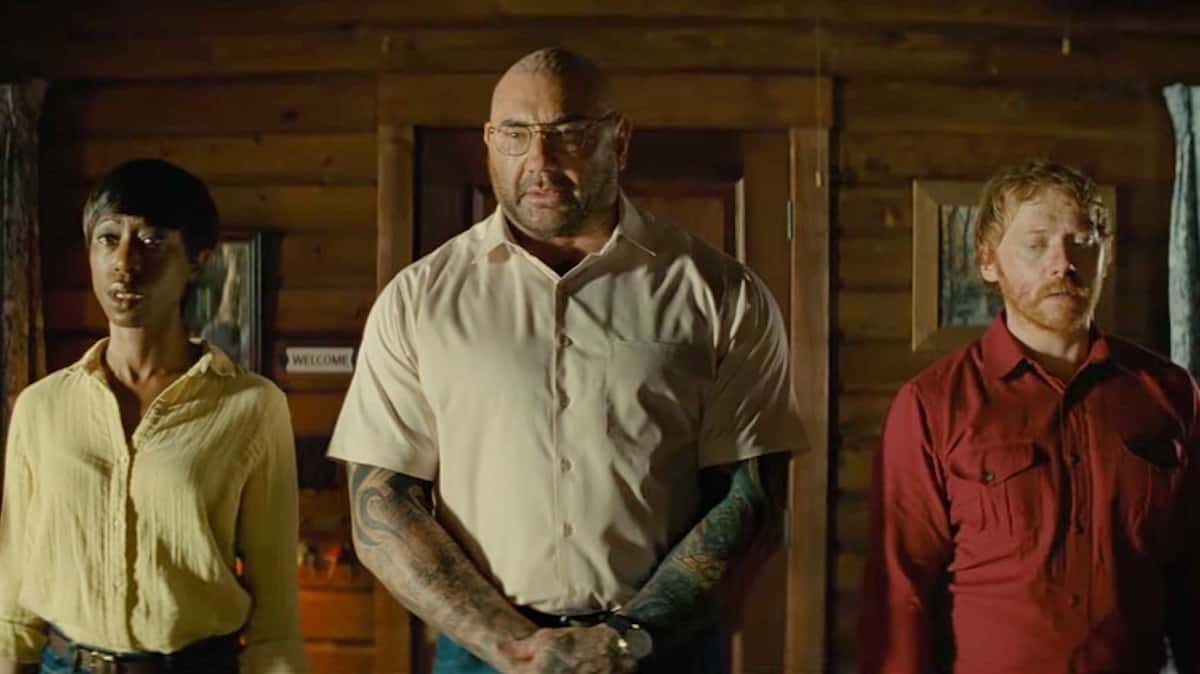 Universal Pictures has released the latest trailer from the thriller, Knock at the Door. The suspense-filled film is the latest effort from M. Night Shyamalan. The movie is based on a book titled The Cabin at the End of the World by author Paul Tremblay. Shyamalan shares writing duties with Steve Desmond and Michael Sherman.

The film stars newcomer Kristen Cui as a little girl named Wen, who is on a camping trip with her fathers, played by Jonathan Groff of The Matrix Resurrections, and Ben Aldridge from Fleabag. While quietly relaxing outside, Wen is approached by Dave Bautista’s mysterious character. Things quickly turn ominous as Bautista and three companions, played by Nikki Amuka-Bird, Abby Quinn, and Rupert Grint, take the family hostage and give them some chilling instructions. In an interesting hook, Bautista’s character lets the family know, “Your family has been chosen to make a horrible decision. If you fail to choose, the world will end.”

Shayamalan, being a Philadelphia native, usually centers his films around the area. This time, he filmed on location in Jersey, where he also had previously filmed the 2004 thriller The Village. The movie was filmed in Burlington County. The 2018 book the film is based on takes place in New Hampshire.

M. Night Shyamalan has an interesting career path with audiences. This latest follows 2021’s Old, which received a mixed reception. As his career started off strong, the director seemingly cornered himself as the auteur with twist endings that would have varying results. When things took a dip critically with films like Lady in the Water and The Happening, the Philly director revitalized his career with 2016’s Split and proceeded to follow it with 2019’s Glass which had also garnered mixed reactions.

Knock at the Cabin is scheduled to knock on theater doors on February 3, 2023.