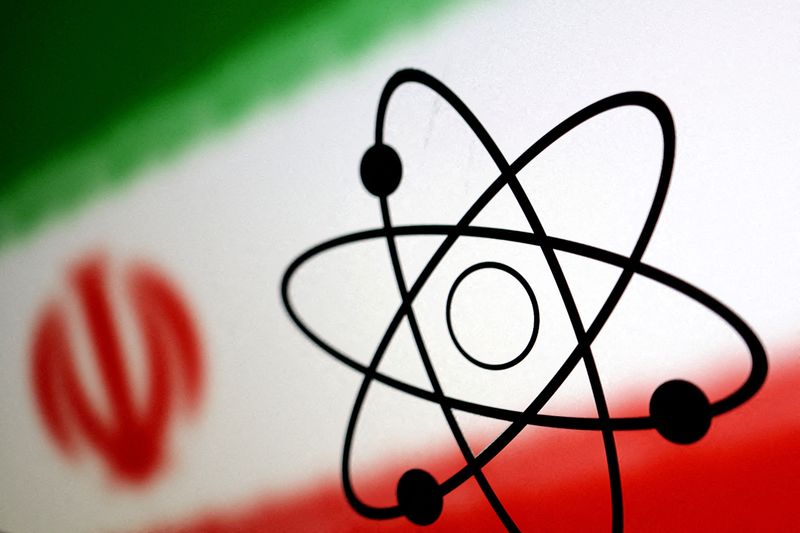 © Reuters. FILE PHOTO: The atomic symbol and the Iranian flag are seen in this illustration, July 21, 2022. REUTERS/Dado Ruvic/Illustration/File Photo

JERUSALEM (Reuters) – Israel does not anticipate a renewal of Iran’s nuclear deal with world powers before the U.S. mid-term elections in November, an Israeli official said on Sunday, after European parties to the negotiations voiced frustration with Tehran.

Having supported then-U.S. President Donald Trump’s withdrawal from a 2015 Iranian nuclear deal which it deemed too limited, Israel has similarly been advocating against the re-entry sought by the current U.S. administration.

On Saturday, Britain, France and Germany said they had “serious doubts” about Iran’s intentions after it tried to link a revival of the deal with a closure of U.N. watchdog probes into uranium traces at three of its nuclear sites.

“At this point in time, it appears that a nuclear agreement with Iran will not be signed at least until after the (U.S.) mid-term elections,” the Israeli official told reporters on condition of anonymity.

Some Israeli commentators saw the remark as anticipating reluctance by U.S. President Joe Biden to enter a deal close enough to the vote for Republican rivals to use it in their domestic campaigns against his Democratic Party.

“Israel is conducting a successful diplomatic drive to halt the nuclear deal and prevent the lifting of sanction on Iran,” he said. “It’s not over yet. The road is long. But there are encouraging signs.”

Iran, which denies seeking nuclear arms, has since the U.S. walkout itself breached the 2015 deal with ramped-up uranium enrichment, a process that can create bomb fuel down the line.

Israel is not a party to the Vienna talks. But its worries about Iran and threats to take military action against its arch-foe if it deems diplomacy a dead end keep Western capitals attentive.