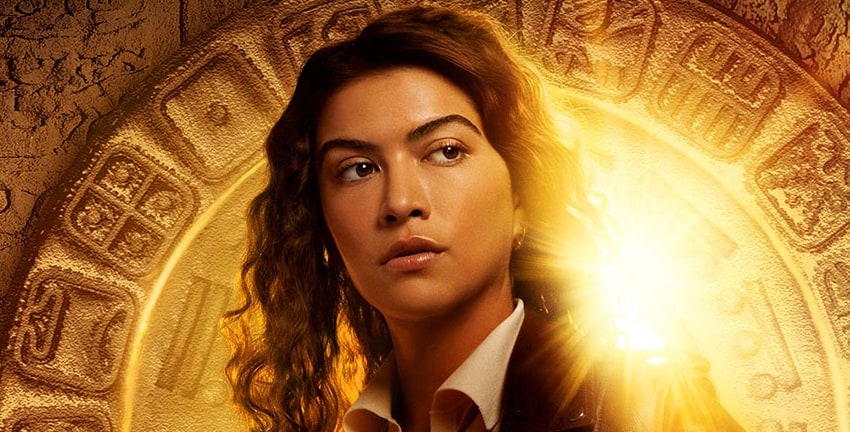 There were a lot of trailers revealed at the recent D23 Expo, but one we missed was the new trailer for National Treasure: Edge of History. The upcoming Disney+ spinoff of the big screen franchise may be lacking Nicolas Cage, but it does look like it will offer up the same type of globe-trotting treasure hunts audiences loved in the first two movies.

National Treasure: Edge of History focuses on a young heroine, Jess (Lisette Olivera), a brilliant and resourceful DREAMer who embarks on the adventure of a lifetime to uncover the truth about her family’s mysterious past and save a lost Pan-American treasure. Justin Bartha will also be reprising his character of Riley Poole in a guest-starring role. Poole appeared in the two National Treasure movies as a computer expert and a friend to Nicolas Cage’s Benjamin Gates. Also returning is Harvey Keitel as FBI Special Agent Peter Sadusky, and it seems he might hold the key to this latest mystery.

The series also stars Zuri Reed (Flatbush Misdemeanors) as Tasha, Jess’ ride-or-die friend who joins the treasure hunt but is forced to reevaluate her belief system to help her best friend; Antonio Cipriano (Jagged Little Pill) as Oren, a lovable but self-obsessed goofball with an encyclopedic knowledge of conspiracy theories that attempts to win back Tasha’s affections; Jordan Rodrigues (Lady Bird) as Ethan, Jess’ childhood best friend who has loved her since the day they met; Jake Austin Walker (Rectify) as Liam, a swoon-worthy struggling musician, with a permanent chip on his shoulder, who comes from a long line of treasure hunters; Catherine Zeta-Jones (Chicago) as Billie, a badass billionaire, black-market antiquities expert and treasure hunter who lives by her own code; and Lyndon Smith (Parenthood) as FBI Agent Ross, a dogged investigator who begins to realize there’s a greater conspiracy at hand.

As far as National Treasure 3 goes, Nicolas Cage was asked earlier this year if was possible, but he replied, “No, the priority was to turn it into a TV show so I would say probably not.” However, franchise producer Jerry Bruckheimer revealed last month that they’re “working on the script right now” and that they’ll be sending it along to Cage soon. The National Treasure TV series will debut on Disney+ on December 14th. What did you think of the new National Treasure: Edge of History trailer? Will you be watching?