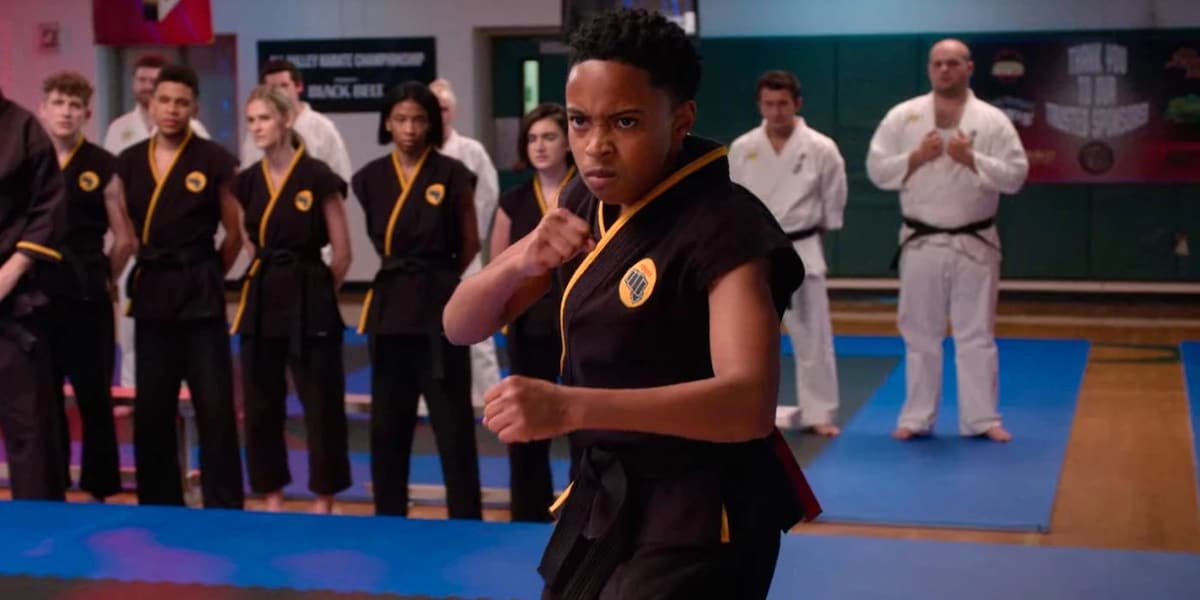 Cobra Kai V has finally premiered on Netflix, and our own Chris Bumbray has had the opportunity to participate in a roundtable discussion with the cast! Here, we ask Dallas Dupree Young about his experience on the show as newcomer, Kenny Payne.

Chris: I want to ask you about the big fight scenes. What kind of preparation goes into those? Do you have a martial arts background coming into the show? Cause you certainly look like you kick some ass on screen!

Dallas: I appreciate that, first off! I do have a little martial arts background, but, uh, the last time I did martial arts before this show was whenever I was 5 years old. So, I didn’t really remember it back there. But it was just muscle memory for me when I started to get back into that mode. But for me, my preparation is definitely I try to listen to pump music. For me, it’s a song called “Remember the Name.” Every time I need to get excited, get pumped up, especially if I’m in a down mood, I listen to that song and I’m ready! I stay focused. I stay in my own head. I just figure out where my character is. Where his mindset is at the time of the scene.

Chris: I really like the chemistry between you and Thomas Ian Griffith this season. And there was kinda like a father-son thing going on cause I think Terry saw a lot of himself in your character. And I find that, even though Terry’s the bad guy, I did have some sympathy for him. Do you think that a part of him wanted something that was good for your character?

Dallas: Yeah, I believe, in Terry’s mind, he wants whats best for Kenny through and through. I believe he trusts Kenny’s instincts at all times. And that relationship between the two is so complex, but it was very special and it meant a lot to Kenny’s future and the identity of Kenny and who Kenny was. But yeah, I just think their relationship was strong and it was powerful and that’s why Kenny was the way he was in season five and the evolution of Kenny.