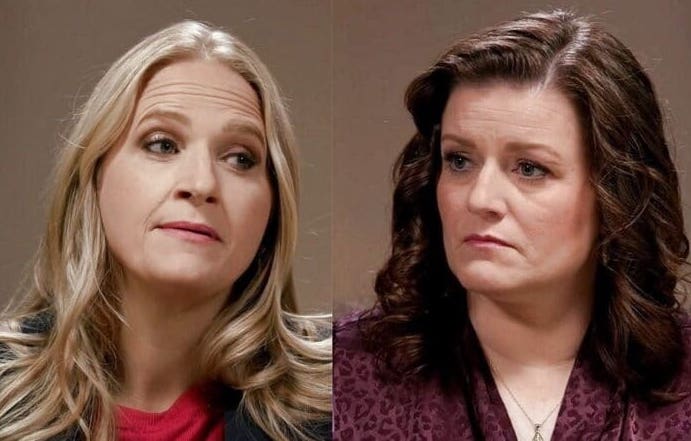 On Sunday night, TLC aired the Season 17 premiere of Sister Wives, aptly titling the installment “It’s Over” because the footage took viewers behind the scenes of Christine’s split from her horrible and selfish spiritual husband, Kody.

At one point on the episode, Kody blasted Christine for her plan to move out of Arizona and back to Utah.

At another point, Christine detailed the basis behind this split, spelling out as clearly as possible for fans.

“I think he has a favorite wife and that’s why all of this is like it is,” Christine came right out and admitted, obviously referencing Robyn.

Added Christine on this sensitive topic:

“Apparently I’m not treating her well enough so there’s nothing I can do. I mean, honestly, what he’s asking from me is ridiculous.”

Robyn, of course, is Kody’s only legal wife; they got married in 2014 so that he could officially adopt her children from a previous relationship.

“I feel like to Kody, Robyn’s more important, certainly than I am,” continued Christine on the premiere.

“And I’ve been a third wheel for years now. And I know it and everybody knows it. It’s sad and it sucks, but my relationship with Kody isn’t as important. It’s not.

“No matter what he says it isn’t.”

Shortly after Christine announced her break-up in November 2021, Us Weekly quoted a source who also pointed at Robyn as the main source of tension between the now-former-couple.

Elsewhere, Christine spoke to People Magazine in promotion of Season 17 last month and also talked openly about her issues with Robyn and Kody’s connection.

“As soon as I told everybody, [Janelle] was the only person who talked to me afterwards. I didn’t even talk to Robyn or Meri after that.

“The next time I talked to them was Isabelle’s graduation party and then when I told them I was moving, that’s the only contact I’ve had with them.”

Also on the premiere, Christine said she had only slept with Kody a couple times in the past year — and then said the following in a confessional:

“He’s just not attracted to me.

“I can count on my hand how many times he told me I was beautiful, and I don’t think that has anything to do with my sister wives.

“That’s just what it comes down to.”

By the end of their revealing discussion, Christine and Kody were at least able to agree that their marriage was over.

“We can’t make ourselves into something that we don’t want to be because I think I tried doing that for years now,” Kody confessed before the episode concluded.