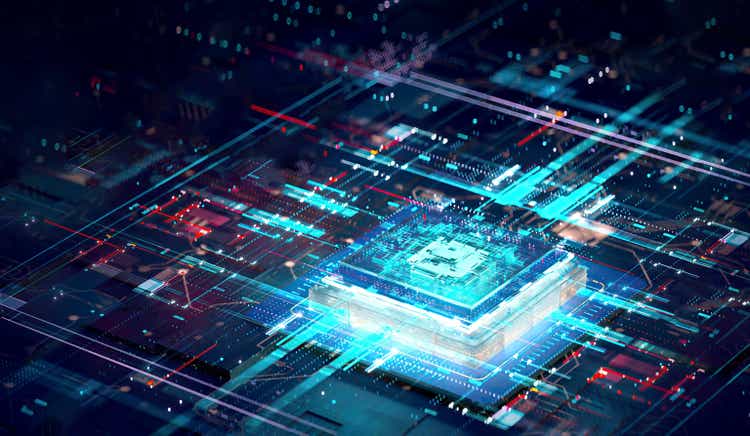 Semiconductor equipment suppliers are likely to keep benefiting from the industry’s growth over the long-term, even if there is some bumpiness in immediate months ahead, according to investment firm Stifel.

The firm, which started coverage on several semiconductor companies this week, noted that those in areas like field programmable gate array [FPGA] devices and electronic design automation are poised for future growth.

Analyst Ruben Roy said that Lattice Semiconductor (NASDAQ:LSCC), which specializes in FPGA, has executed “well” by moving into key growth markets, and has seen accelerated revenue growth and improved profitability in the past several quarters.

Roy added that Lattice (LSCC) is entering the mid-range FPGA market later this year, which should boost its long-term opportunity to $6B, up from $3B currently. However, with Lattice (LSCC) trading at 27 times 2023 estimated earnings and 10 times estimated sales – compared to 16 times earnings and 4.4 times revenue for the peer group – the stock is a bit expensive right now.

“We believe that the turnaround story is well understood and is reflected in the company’s premium valuation relative to the semiconductor group,” said Roy, who has a hold rating on Lattice (LSCC) shares.

Lattice Semiconductor (LSCC) shares are down roughly 30% year-to-date, even as the company’s transition to focusing on lower power FPGA technologies over the past 18 months has helped boost its revenue growth. And with the move into the mid-range market, there’s no reason to believe this won’t continue, as the company’s own third-quarter guidance implies “strong double-digit year-over-year top-line and earnings growth,” Roy explained.

Companies in the electronic design automation space, like Cadence Design Systems (NASDAQ:CDNS) and Synopsys (NASDAQ:SNPS), also look likely to keep seeing fundamentals improve, as Roy believes they will benefit from the “increasing complexity and challenges” of chip design and manufacturing.

But it’s been the growth of non-traditional companies looking for semiconductors that have really aided the electronic design automation space, Roy explained.

Cadence (CDNS), which Roy has a hold rating on, is seen as “well positioned” to benefit from this trend, given that it has use its system design enablement to help companies use its EDA tools beyond the traditional use cases.

Synopsys (SNPS) is seen as having an even better profile, given that it has not only core EDA tools and services, but it has moved into software.

The move, which started in 2014, has helped Synopsys (SNPS) differentiate itself from its competitors and assemble what Roy called the “broadest portfolio and security and quality technology in the marketplace,” along with more than 4,000 customers.

Software could represent as much as an additional $2.5B opportunity for Synopsys (SNPS) and allow it to grow at 20% year-over-year, compared to just mid-teens growth for the market.

It’s also likely that software revenue should help Synopsys’s (SNPS) margin profile and keep its earnings multiple higher than some of its peers, Roy explained.

Last month, Lattice (LSCC) expanded its buyback program, tacking on another $150M, with the program running through the end of 2023.