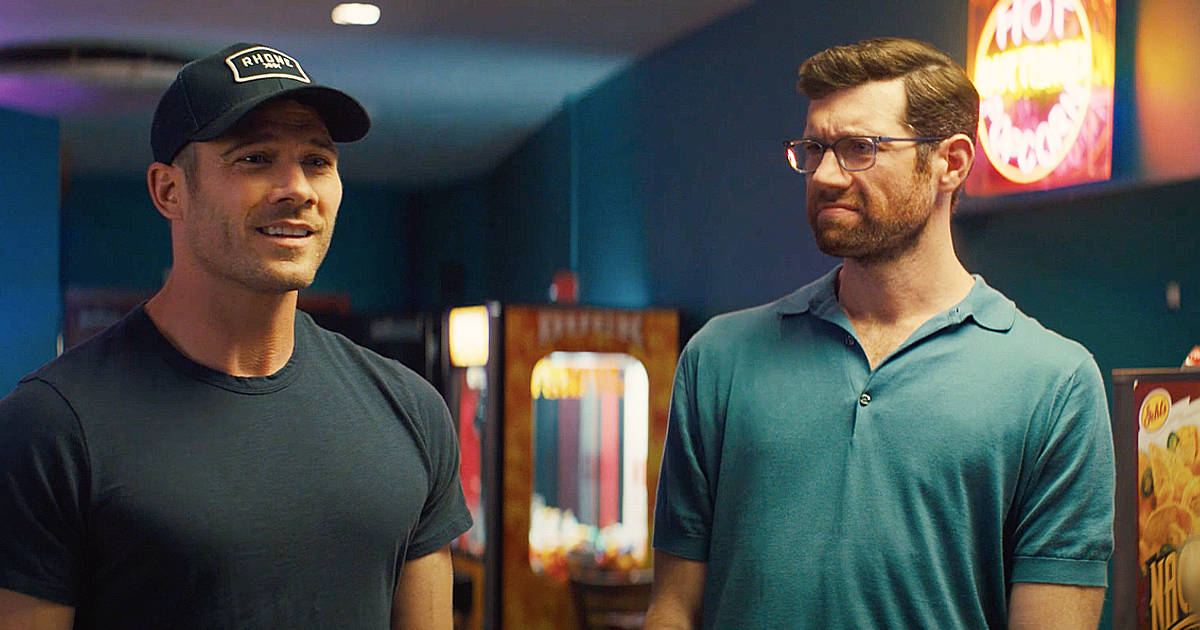 PLOT: Bobby Leiber (Billy Eichner) is a gay influencer who’s unlucky in love. At forty, he’s never had a serious relationship, but things change when he meets Aaron (Luke Macfarlane), a commitment-phobic lawyer.

REVIEW: A lot is being made about Bros being the first big, mainstream gay-romantic comedy to get a huge, 3000 theater release from a major studio. Produced by Judd Apatow and co-written (with star Billy Eichner) by Nicolas Stoller (Finding Sarah Marshall), the film is funny enough that it has a real chance of becoming a breakout hit. The audience at TIFF was left in stitches throughout, proving Universal may have a significant crowdpleaser on their hands. Whether or not it can overcome a market that’s becoming punishing for big-screen comedies is another question, but this has a shot at making a significant impact.

Eichner stars as our rom-com hero, Bobby, who runs a podcast devoted to gay history and is about to open a sprawling LGTBQ museum. While all seems well on the professional front, he has to deal with constant office squabbling, while his occasionally prickly nature sometimes gets him into trouble. Bobby has a hard time not expressing himself, and when he meets Luke Macfarlane’s Aaron, they seem an unlikely pair. Aaron is everything Bobby is not, and vice-versa. Aaron works in the corporate world, is a hulking gym rat and has macho tastes (he proudly says his favourite movie is The Hangover). Neither man wants to be in a relationship, but oddly enough, they seem well-matched, although they have significant hurdles to overcome, particularly Bobby’s need for trust and monogamy.

One interesting thing about Bros is that at the beginning of the film, Bobby goes on a rant explaining how he was once approached to write a gay rom-com that seemed too tailored to a straight audience. He mocks the studio exec’s suggestion that “love is love is love.” Still, oddly enough, the film proves the exec could have been right, with the ultimate love story between the two guys being pretty universal, whatever your sexual orientation happens to be.

One thing that distinguishes it is that it’s almost utterly devoid of schmaltz, and Eichner, working with Stoller and Apatow, makes sure to work in many outrageous and R-rated bits that had the premiere audience almost rolling in the aisles. The movie features perhaps the screen’s first “foursome,” a comic set-piece demonstrating Eichner’s flair for physical comedy, and his rants are often hilarious. Heck, at times, they were even thought-provoking to this straight critic. That said, the film is anything but preachy, with the ultimate message being to love who you love and be yourself, something I think we can all identify with. The big issue I had with the movie is that it perhaps sticks to the formula TOO CLOSELY, with the hurdles the two facing awfully familiar to anyone who’s seen a rom-com. It also ends with a musical number that’s perhaps the only time the film comes close to getting schmaltzy, but then again, the audience here cheered when it was over, so most audiences probably aren’t as cynical as I am.

The movie offers some interesting insight into the gay dating world, which are mostly mined for humour but also provide a bit of sly commentary. Bobby is seen going on Grindr dates where the hookups are anything but satisfying. Despite being a successful, good-looking gay dude, he’s never had a real boyfriend at forty. Meanwhile, Macfarlane’s Aaron is cut and often objectified for his looks, but we also see himself injecting himself with testosterone to keep up his impossible physique. Even this, however, is not seen as an inherently bad thing, with Bobby later experimenting with testosterone to predictably wacky results.

Eichner and Macfarlane’s chemistry grounds the film the same way any well-cast rom-com does, and the two play well off each other. The supporting cast is good, too, with Guy Branum’s Henry, Bobby’s BFF, stealing every scene he’s in. One sticking point many gay audiences have with movies aimed at them is that inevitably the stories end in tragedy, and Eichner’s film seeks to remedy that, with the goal being to make everyone walking out of the film feel great. In that regard, the film is a significant success, and even if you might not think you’re the target audience for a movie like this, I’m pretty sure anyone who checks it out will have a great time. 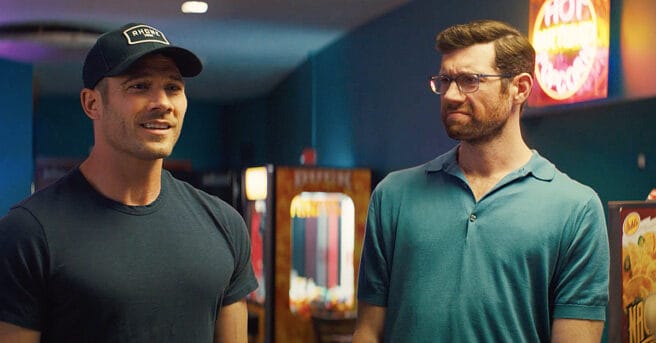