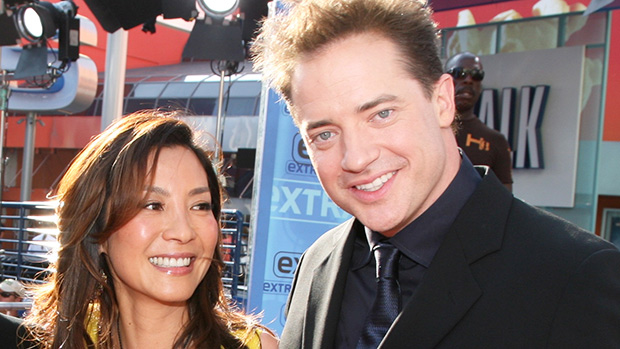 They’re back! Brendan Fraser and Michelle Yeoh took a sweet selfie together while attending the award ceremony for the Toronto International Film Festival (TIFF) on Sunday, September 11. The two stars, who had previously appeared together in The Mummy franchise, looked incredibly happy to see each other as their movies were each celebrated at the award show.

Brendan, 53, rocked a simple suit for the event, while Michelle, 60, sported a white button-down top. In one of the photos, the Everything Everywhere All At Once star reached up and smiled at Brendan, as she held his face in a super cute moment. The reunion marked a special moment for both actors, 14 years after they had co-starred in the 2008 action, fantasy flick The Mummy: Tomb of the Dragon Emperor, which was the third film in the trilogy that Brendan starred in, and Michelle’s only appearance in the series. Brendan played leading adventurer Rick O’Connell, while Michelle played an immortal sorceress Zi Yuan.

Both stars were also honored at TIFF, with different tribute awards. Brendan was honored for his moving performance in the Darren Aronofsky-directed The Whale, in which he stars alongside Sadie Sink. Michelle was given the festival’s Share Her Journey Groundbreaker award.

Brendan’s performance in The Whale is already generating a ton of buzz. When the movie premiered at the Venice Film Festival earlier in September, he received a standing ovation for his performance as Charlie, a 600 pound English teacher, struggling with obesity and difficulty connecting with his teen daughter, played by Sadie.

In his acceptance speech, the actor spoke about how special of a role it was. “The Whale. It’s a redemption story about a guy called Charlie, and he’s gone through significant life changes, and he’s forgotten about who he is to the ones he loves, and he’s running out of time to tell them that, if he can at all,” he said. “Charlie can see the good in others, when they can’t see that in themselves.”

Michelle has also been incredibly busy! She lent her voice to the huge hit Minions: The Rise of Gru. She’s also cast to appear in the upcoming Avatar sequels, including the upcoming Avatar: The Way of Water. She also starred in the hit Everything Everywhere All At Once, which was released in March.